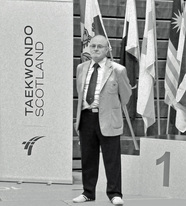 Master William Darlington:
We would like to pay tribute to a man who has lived and breathed taekwondo and taekwondoscotland.
He is what can be described as the founding father of taekwondoscotland and is partly responsible for the inception of The Commonwealth Taekwondo Union.
We hope each and every person who was part of The 2014 Commonwealth Championships realises that without him; the whole concept of these events may never have been born.
Everyone at taekwondoscotland and throught the World taekwondo family should wish him a
happy "retirement" from The Chairperson position. Well done Master Chairman!
taekwondoscotland™

Master David Bailey: World Masters Champion
taekwondoscotland would like to expres our congratulations to
Central Taekwondo Instructor; Master David Bailey who won the World Masters Games in Turin, Italy. 10/8/13
We ARE NOT "ITS" SCOTLAND
To all site visitors: taekwondoscotland is the Official Governing Body
for World Taekwondo Federation (Olympic Taekwondo) in Scotland.
We are in no way connected to
"ITS" (Independent Taekwondo Schools) Scotland which was featured on a Youtube video recently.
"ITS" Scotland is an independent ITF group and the instructors are not connected with our organisation!
Asia Bailey - Outstanding Performance Rewarded!
Following a series of outstanding results over the past 12 months and having set a number of records, including winning 7 medals out of 7 consecutive A-class tournaments – with three of these medals in the senior divisions, Asia Bailey, has received a call from the Performance Director of the British Olympic Taekwondo Team to join the British National Team programme. On top of that Asia is also going to receive the support of sportscotland’s Institute of Sport (Scotland’s service provider for High Performance athletes). Asia is now best placed to make her Olympic ambition a reality. She has the determination and the ability to be a great Olympian and everyone at Taekwondo Scotland wishes her all the best in this next exciting chapter of her TKD career. Asia, you have earned this great opportunity because you are not afraid of hard work, you are determined and committed, you have lots of passion for your sport and your country and you listen to your coaches. We know you are going to use every opportunity to reach the very top and everyone at Taekwondo Scotland will always be there to cheer you on and gloat for the great player you will become and for the great person you will always be. Keep up the great work and stay focused; the journey is only beginning.
Bank of Scotland - Local Heroes Awards 2013
What an inspirational two days for Scotland’s cadet champion Jordyn Smith and junior player Kristian Kinnon at the Local Heroes event sponsored by the Bank of Scotland and supported by SportsAid. On 16th April they were both at the Sir Chris Hoy velodrome together with young top Scottish athletes from other sports and met Olympic Champion and Scottish Legend Katherine Grainger who told them all about her experiences! Fantastic! Well done to Jordyn and Kristian and a big thank you to SportsAid and the Bank of Scotland. We hope this is an inspiration for all the other young players in Taekwondo Scotland’s programme to do their best and reach this level too!
For those young players outside taekwondoscotland who aspire to compete for Scotland and the British National Teams and would like be part of our programme you are very welcome anytime at one of the TKD clubs registered with taekwondoscotland HERE
More News:
National Team Elite Squad; Selection Criteria Published - Details
High Performance Programme - Mission Statement
Scottish Cadets Join GB National Team
Cadets Programme.
Congratulations to Jordyn Smith & Naomi Strathie.
Read the full story and see the skills slideshow HERE
Scottish Juniors Join GB National Team
Juniors Programme
Congratulations Asia Bailey & Kristian Kinnon
Read full report & view Skills Slideshow - HERE
Asia Bailey
GB Team Selection for World Championships
Report on Asia's selection for the 9th Junior World Championships in Egypt  -  View
Scotland National Team at 2012 Dutch Open - View
Scotland National Team Selection Procedure - View
Asia Bailey at 2012 German Open - Report
Asia Bailey Wins 2012 Dutch Open: REPORT
Congratulations to all Scottish National Team Players
at the Dutch Open
View Display Videos
The 2012 Scottish National Taekwondo Seminar - View
Belgian Open - Report from Central Taekwondo - View
August 2012 Black Belt Grading: Presentation Photos  Available NOW!! - View
Asia Bailey - World Bronze Medalist!
Scotland Elite Squad member Asia Bailey (Central Taekwondo)
Bronze medal at the 2012 World Junior Championships in Egypt to become the first Scottish player to win a medal
at a World Championships Event.
A full report will be published soon.
National Taekwondo Seminar - Photos Published
Technical Gallery
Sport Gallery
taekwondo scotland